Freeing a Terrorist Comes With a Price 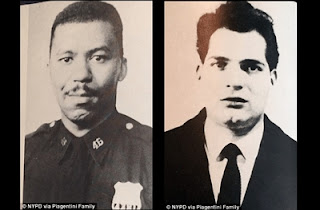 Freeing a terrorist who murdered three police officers diminishes the value we as a society place on the lives of those who protect us.  The New York State Parole Board made an egregious error when it decided to release domestic terrorist Herman Bell from prison next month.  Bell a member of the Black Liberation army was responsible for the deaths of NYPD Officers Waverly Jones and Joseph A. Piagentini.

If you listen to Bell you'd think he was a model citizen.  His own words were; "I am not a criminal...I never posed a danger to...society."
Oh really ?  Since when is a terrorist killing police officers no longer a danger to society?
In their current decision, the NY parole commissioners reasoned that Bell "was productive in prison." They pointed to the fact that he had earned two college degrees and had been influential in numerous community outreach organizations as far away as Maine. What they either overlooked or completely ignored was that, in addition to those activities, Bell had also established ties with other domestic and international terrorist organizations. People who support groups such as the Anarchist Black Cross movement, the Antifa movement, Hamas, Islamic Jihad, and the Palestinian Solidarity Movement have visited and communicated with Bell during his time in prison. Others affiliated with those same groups were cellmates of his.

Bell was also active in the anti-Semitic BDS movement and had posted statements supporting the current violent attacks against Israel.
The NYPD Patrolmen's Benevolent Association, which represents the more than 35,000 police officers, has petitioned the court to overturn the parole board's decision. The Board did not consider the sentencing minutes or the concerns of the slain officers' families in deciding to free Bell, the PBA argues. The families of Joseph Piagentini and Waverly Jones lost a husband, a father, and a brother. The hurt from that loss has not diminished over the years.
We can only hope that the judge will consider the totality of Bell's terrorist acts and reverse the parole board's foolish decision, sending a clear message that there is no atoning for the lives of those killed by terrorists.

Otherwise, another outrageous decision to release a murdering terrorist may be made in less than three months, when Bell's co-defendant and fellow terrorist Anthony Bottom, now known as Jalil Abdul Muntaqim, appears before the same parole board.

A free society values the lives of its members, especially those who serve to protect it from terrorism. Allowing terrorists who kill to go free comes with a cost. It diminishes the value of the lives lost.

And that is a price we are not willing to accept.  IPT News....

Posted by Patrick Dunleavy - Author at 1:36 PM No comments: