Study Reveals Muslim Prison Gangs a Problem in the UK 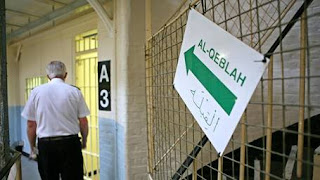 One group, radicalized Muslims, dominates the prison system, Britain's Ministry of Justice found in a study into prison gangs released earlier this month.  Operating as a prison gang, the group calls itself the "brotherhood." And while it doesn't appear connected to the Egyptian Islamist movement, it does try to enforce its version of Islamic law on all prisoners regardless of faith. Rules cover personal hygiene and what inmates are allowed to eat in their cell block. Some inmates may be forced to pay a tax to the Muslim brotherhood. The brotherhood was the only group mentioned by staff and prisoners they did not consider there to be any other significant groups of prisoners...Obedience is achieved by violence and intimidation carried out by members of the group known as enforcers. "Those who had committed terrorist crimes often held more senior roles in the gang", the study found.
Read More in IPT News...
Posted by Patrick Dunleavy - Author at 12:51 PM No comments: