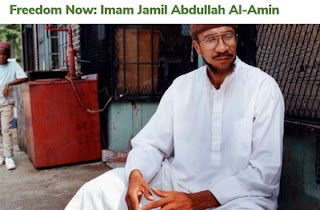 "Violence is a part of America's culture. It is as American as cherry pie...If America don't come around, we're going to burn America down."                                  These are the words of a young African American man known as H. Rap Brown. What began as a life involved in the nonviolent civil rights movement spiraled downward to violent crime and murder.  Brown's trajectory to a life a violent crime rapidly increased after he left the Black Panther Party. He was arrested in 1971 for armed robbery in New York City and sentenced to prison. He converted to the Dar ul Islam movement,while in Attica Following his conversion he changed his name to Jamil Al-Amin.  He was arrested in 2000 for the shooting death of Deputy Ricky Kinchen.  Courts found "substantial physical evidence" linking Jamil Al-Amin to the 2000 murder of Atlanta deputy Ricky Kinchen trying to serve an arrest warrant. But an Islamic Circle of North America branch casts Al-Amin as a persecuted civil rights leader.

"If you're asking me if I ever considered him a hero or a valuable contributor to the civil rights movement, my answer is definitely no,"  (David Kinchen, brother of slain officer)

National Peace Officers Memorial Day was marked last month. Initiated by President Kennedy in 1962, it honors those law enforcement officers who were killed or wounded in the line of duty.  Attempts to re-write Jamil Al-Amin's story is an insult to Deputy Kinchen's memory.  Read More in IPT News...

Posted by Patrick Dunleavy - Author at 8:26 AM No comments: