On February 3rd of this year, Patrick Dunleavy, author of "The Fertile Soil of Jihad" spoke to attendees of the Annual Army Worldwide Antiterrorism Conference in Orlando, Florida.  The event was hosted by the Office of the Provost Marshal General. 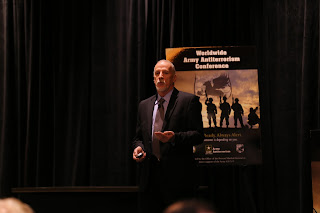 The theme of this year's conference was "The Evolution of Antiterrorism."
Mr. Dunleavy presented an examination of the radicalization process of prisoners held in the federal penitentiary system, the influence of currently incarcerated terrorists, and its potential impact on our society.  He commented that radicalization spans all ethnic boundaries within the prison system.  He challenged the attendees to reflect on what happens after the capture of a terrorist.  Mr. Dunleavy outlined numerous current U.S. court cases and focused on the Religious Freedom Restoration Act, implemented to ease the conditions of confinement for convicted terrorists.  He also provided a historical perspective on the progressive evolution of Islam in the American prison system, culminating with the availability of radical Islamic clergy to prisoners.  His final word to the group was
“the most dangerous weapon available to a radicalized prisoner is access to social media.”

alluding to the fact that cell phones have become the number one contraband item in the U.S. prison system, and that ISIS presently uses social media to both attract and direct radicalized individuals .
In regard to the future of the threat,  Dunleavy referred listeners to a recent Congressional Research report that stated within the next five years approximately 100 hundred inmates convicted of terrorist related crimes will be released from prison.